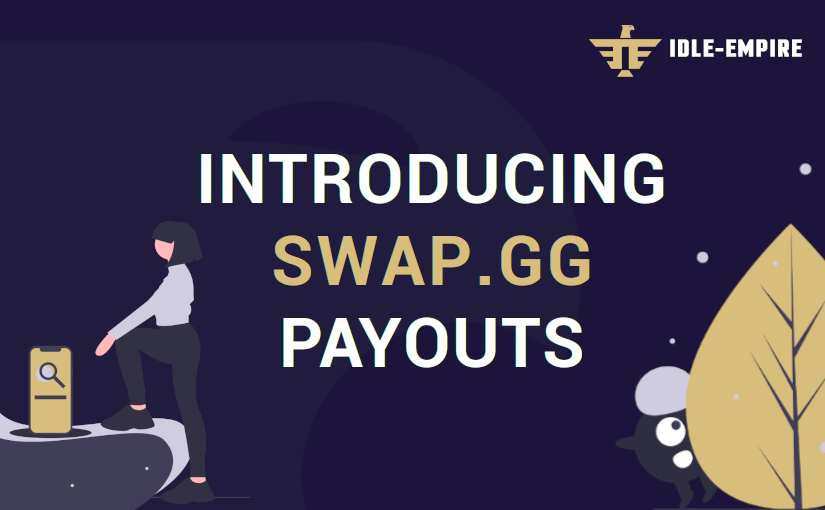 We’re happy to announce that we’ve partnered with SWAP.GG to bring you an even larger selection of CS:GO, Dota 2, Rust, TF2, Payday 2, and H1Z1 skins. You can now use your Idle-Empire Points to withdraw SWAP.GG Gift Cards.

SWAP.GG lets you buy, sell, and trade your skins. The platform has been around since 3 years and for quite a while, they only offered a trading service similar to CS.MONEY. But they recently released their marketplace which allows you to buy and sell skins – just like BitSkins, SkinBaron, or Skinbay. On SWAP.GG, you can currently buy and sell skins for the following games:

SWAP.GG has been launched in 2017 and is run by Xyvo Gaming, a company based in Amsterdam, the Netherlands. The platform has been operational for over 3 years. Since then, it has been offering cross-game trading to over 7,000 users on a daily basis with a total amount of more than 3 million facilitated trades to people from over 150 different countries.

The platform is characterized by an easy-to-use and smooth UI, a broad range of filters, a 24/7 built-in support ticket system, and a no-bullshit guarantee. The sales fee of the marketplace is set at 7% but can be reduced to 5% by adding “swap.gg” to your Steam nickname. The trading commission varies between 8% and 10% but can be reduced by 3% when adding “swap.gg” to your Steam nickname. The platform offers a variety of deposit and withdrawal methods, including PayPal and Bitcoin. As a buyer, you can enjoy instant item delivery!

I’m sold! How can I get started?

You can use your Idle-Empire Points to claim your first SWAP.GG Gift Card. Simply head over to our withdrawal page for SWAP.GG Gift Cards and select your desired gift card amount. Fill up that account balance in no time!